The Mack method in conjunction with the bootstrap is used by many practitioners to obtain loss reserve prediction distributions.

This approach is often very misguided and can give grossly inaccurate reserve indications.

"Bootstrapping utilizes the sampling-with-replacement technique on the residuals of the historical data",

"Each simulated sampling scenario produces a new realization of "triangular data" that has the same statistical characteristics as the actual data." (Emphasis added)

This is worth repeating.

"...that has the same statistical characteristics as the actual data."

Bootstrap samples have the same statistical characteristics as the actual data

if the model has the same statistical characteristics as the actual (real) data. 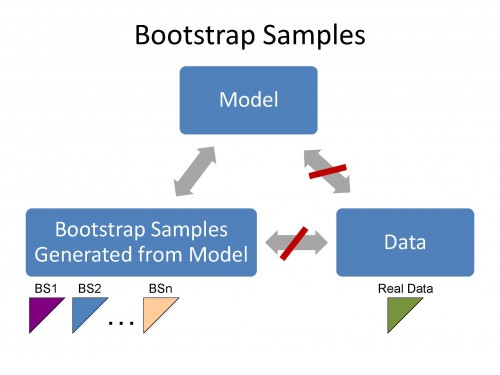 The Mack method, the Murphy method and related methods produce Bootstrap (pseudo) samples that have statistical features (characteristics) that are not related to the actual data. This is because these methods cannot capture nor describe the volatility in real data.

The Mack method is a regression formulation of volume-weighted average (Chain Ladder) link ratios and is the default (starting) model in the Extended Link Ratio Family (ELRF) modelling framework of ICRFS-Plus.

The ELRF modelling framework, that includes the Mack method amongst its numerous methods, is described here. More technical details are given, using a real life example in the demonstration video 1.2.

The Mack method often has standardized residuals with much structure, that is, they are not random. It is not only that the bootstrap technique does not apply in such a situation, but the model fails to describe the volatility in the data and accordingly does not have much predictive power. [See video demonstrations 1.2 and 2.1-2.5].

The bootstrap is a way to obtain an approximate sampling distribution for a statistic (a function of the data).

In the context of modelling loss development arrays, if the data satisfy parametric assumptions and a suitable parsimonious model fits a distribution to each cell (as in the Probabilistic Trend Family (PTF) modelling framework), the bootstrap technique will yield approximately the same predictive distributions as the parametric model.

A general and detailed discussion of the bootstrap is given in the paper by Barnett and Zehnwirth (2007). This paper discusses methodological issues which are often overlooked even in applying the bootstrap to otherwise careful refinements of the Mack method. In particular the need to look at a model's prediction residuals before giving any credence to the bootstrap distribution associated with its forecast.

It is predictive distributions and prediction intervals that are generally of prime interest to insurers (because they pay the outcome of the process, not its mean).

The bootstrap is not a model identification procedure. It does not in any way improve the model- it does not make a bad model good.

Accordingly, it does not avoid the need for assumptions, nor for checking those assumptions. It suffers from essentially the same problems as any other means of finding predictive distributions and sampling distributions. For example, because reserving requires prediction into not-yet-observed calendar periods, model inadequacy in the calendar year direction becomes a serious problem.

In particular, the most popular actuarial techniques based on link ratios and their derivatives- those most often used with the bootstrap - don't have any parameters in that direction, and are frequently mis-specified with respect to the behavior of the data against calendar time.

It is critical to carefully assess both the assumptions and the predictive performance of the model, or the bootstrap prediction intervals can be meaningless.

The bootstrap was devised by Efron (1979), growing out of earlier work on the jackknife. He further developed it in a book (Efron, 1982), and various other papers. There are numerous books relating to the bootstrap, such as Efron and Tibshirani (1994). A good introduction to the basic bootstrap may be found in Moore et al. (2003), which can be obtained online.

In the original form of the bootstrap the data itself is re-sampled, in order to get an approximation to the sampling distribution of some statistic of interest, in order to make inference about a corresponding population statistic.

More complicated models can be bootstrapped by re-sampling residuals. This is the kind of bootstrapping used in most reserving applications.

Suppose we want to find the distribution of a statistic S(y), a function of the data y.

Here is a simple bootstrap algorithm:

Note that a key assumption here is that the standardized residuals ei are random and do not exhibit structure.

We can use these bootstrap samples based on re-sampled residuals to obtain sampling properties of various statistics - such as standard errors of parameter estimates.

The bootstrap can also be adapted to give prediction intervals and distributions.

Further modifications are required to use this to produce prediction intervals.

Here not only are the bootstrap predictions useless but the reserve indications given by the Mack method are at least 80% too high! 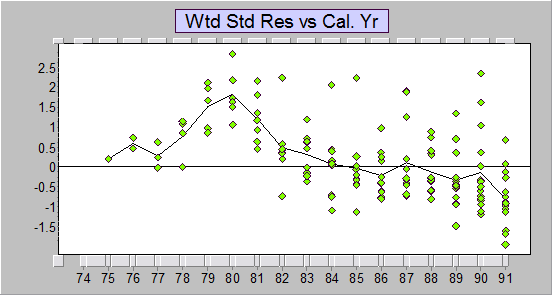 See video demonstration 2.5 LR High that discusses much improved ELRF type models and optimally identified PTF models for the paid losses, case reserve estimates and the number of claims closed, and their inter-relationships. The video explains why the Mack predictions are at least 80% too high.

The data are Worker's Compensation data for a large company studied in Barnett and Zehnwirth (2000).

For more technical details in respect of bootstrapping the residuals for this example, see the paper Barnett and Zehnwirth (2007).

[Some actuaries might only apply Mack to the last three calendar years. However, the method still does not capture the trend (since the cumulatives in the final three years include incrementals from the old trend) and even if it did you would have no description of what it is]. 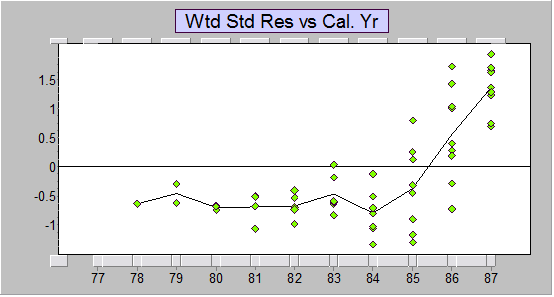 The demonstration video 2.2 ABC considers an alternative optimally identified PTF model that replicates the true volatility in the data. Simulated triangles from the fitted probabilistic model cannot be distinguished in respect of volatility from the real triangle. In the context of PTF type models the actuary has control on future assumptions that can be related to current and past volatility in the business.

Efron, B. (1982) The Jacknife, the Bootstrap and Other Resampling Plans. vol 38, SIAM, Philadelphia.

Efron, B. and Tibshirani, R. (1994) An Introduction to the Bootstrap, Chapman and Hall, New York.