A model identified in the PTF modeling framework predicts (lognormal) distributions and their correlations for every cell in the forecast table.

Since there are no analytical distributions for the aggregate of lognormals, the PALD (Predictive Aggregate Loss Distributions) sub-module simulates from the correlated lognormals in all the cells to obtain distributions of reserves by accident year, calendar year, and the total.

The simulated values are used to compute Quantile (Percentile) and Value at Risk (V@R) tables. They can also be used to price Adverse Development Cover (ADC) and other reinsurance programs.

Diagnostic graphs can be produced for the sample distribution for individual calendar years - such as 2005 above - as well as the total. Similar graphs can be constructed for accident years.

Example Adverse Development Cover output (for specified limits) is shown below. Provision in the module is made for discounting for each layer as applicable. 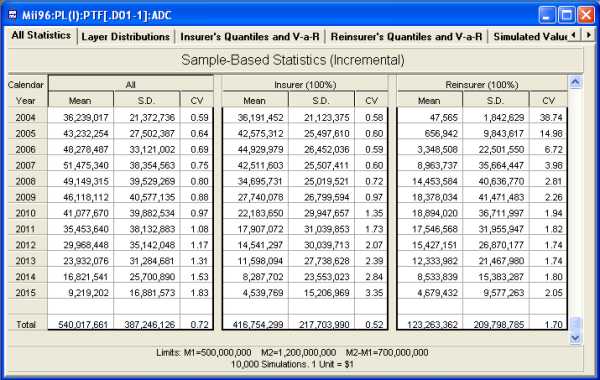 In the above example, the insurer's coefficient of variation would drop from 0.72 to 0.52 should this particular adverse development cover be taken - for this forecast scenario. Optimal reinsurance programs can easily be determined by rerunning the ADC for different settings and for alternative forecast scenarios. 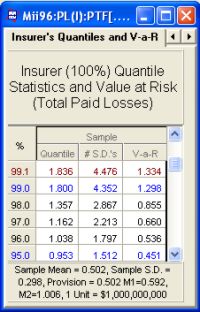 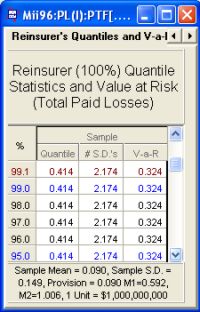 The insurer's and reinsurer's value-at-risk tables are produced (as above) showing the value-at-risk for each party assuming the adverse development cover is applied.

MPTF allows the modeling of multiple triangles simultaneously - whether different lines of business or layers within the same line. For this type of model, PALD allows the construction of an overall, company-wide picture of the total reserve distribution. The distribution of the reserves for the aggregate of the multiple lines, layers, or segments can be calculated. 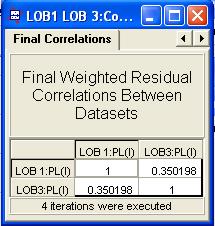 The quantile and value-at-risk table for the aggregate distribution is shown below.