In the presentation, "Integrating Reserve Risk Models into Economic Capital Models" by François Morin of Towers Perrin, the Solvency II one-year risk horizon is measured as the sample variance of the difference between estimates of ultimates today and one year from now. François Morin of Towers Perrin provides several methods of calculating the variance of the change in estimate.

We discuss the consistent and sound statistical methodology for calculating the variation in estimates of ultimates conditional on the next calendar years' data. The relationship between these estimates, consistent estimates of prior year ultimates on updating (next valuation period), and loss reserve increases on updating is discussed in detail here. Note that our approach also applies to the aggregate of multiple LOBs.

For each simulation Step 3 computes E[Ult.|CY] and Var[Ult.|CY] using the model on the updated array.

Provided forecast assumptions (based on the model) are consistent on updating (see previous sections), we also have

François Morin of Towers Perrin mentions "the change in the estimate one year hence" which is equivalent to:

In respect of the identified models in the PTF and MPTF modelling frameworks there is no need to conduct simulations as the above mentioned formulae can be computed analytically using the identified parametric models. The statistics include both process variability and parameter uncertainty.

We include two Forecast Summary tables from ICRFS™, one from the aggregate of multiple long tail LOBs and the other Private Passenger Automobile (PPA). 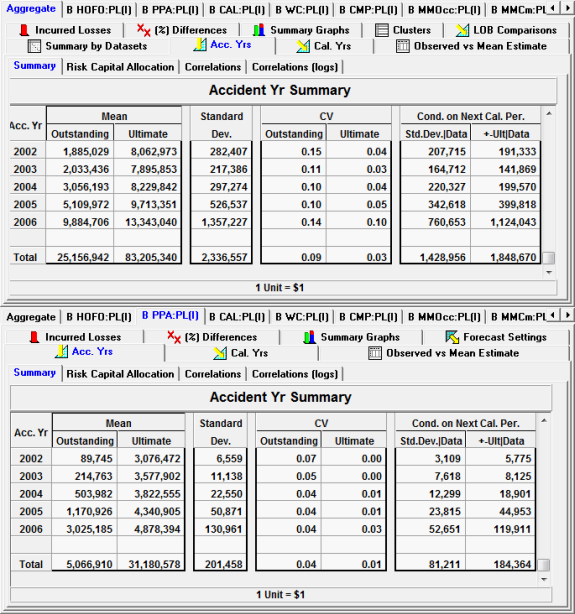 Variation in Ultimates and the associated conditional statistics do not provide sufficient descriptors of the risk margin or cost of capital as required by Solvency II. Furthermore, calculating conditional statistics and variation in ultimates by using the Mack and related methods (including Bootstrapping) are inherently flawed. For a more detailed discussion of the paper by François Morin of Towers Perrin please click here.