Thomas Mack identified the stochastic regression model that underlies volume weighted average link ratios. Other authors, including Murphy and Venter, have developed these ideas further. A graphical representation and regression formulation of link ratios makes it clear what assumptions underpin the methods and extensions thereof.


"There is pleasure in recognizing old things from a new viewpoint." - Richard Feynman

In general, each link ratio (y/x) is the slope of the line from the number pair (x,y) to the origin. 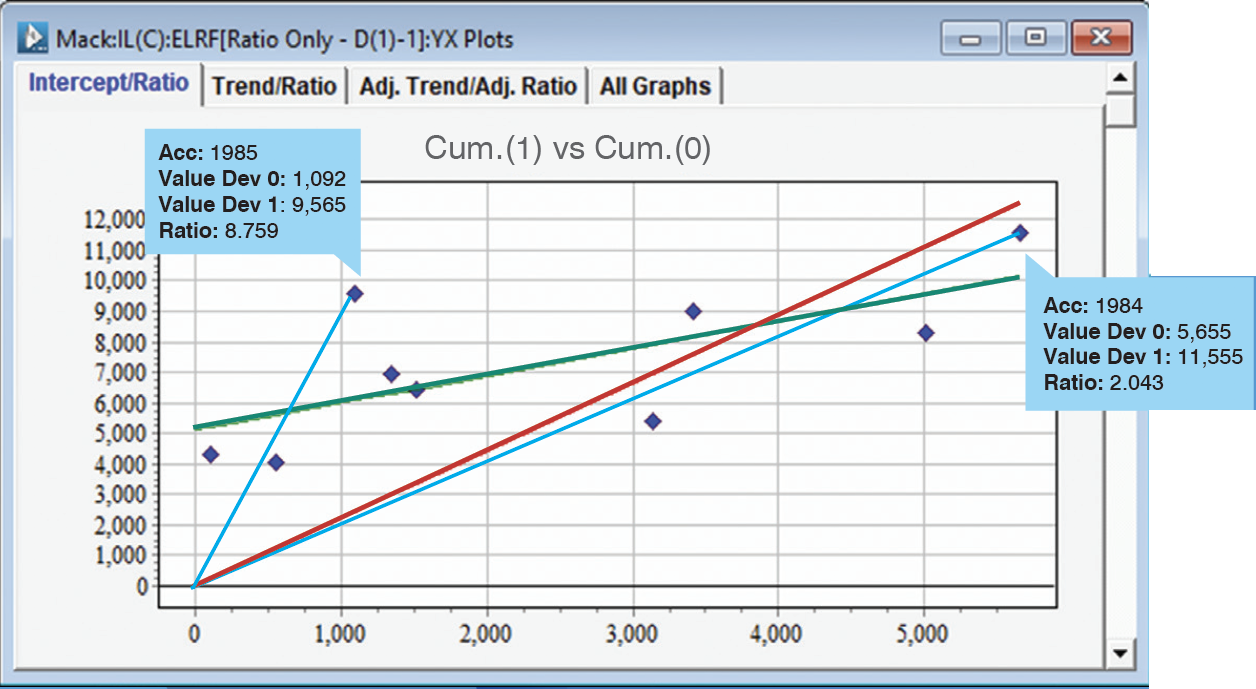 Accordingly, an average link ratio, equivalently average trend, is an average slope through the origin.

This means that the method can be formulated as a regression (Mack (1993)).


When actuaries use link ratios there are two critical assumptions:


The optimum value of b is found by weighted least squares estimation according to the scale of the error terms e(w).

Murphy (1994) extended the regression formulation to include an intercept term.

where a is the intercept term, but b is no longer the average link ratio.

Given that the intercept is positive in the previous graph, the slope of the line with an intercept term is less than any average link ratio (through the origin).

We can obtain visual indications of whether a line with an intercept (Murphy (1994) method) or a line through the origin (Mack (1993) method) is better.


When you use a link ratio to project the cumulative in the next period in essence you are only projecting the next incremental as you know the current cumulative. This is the reason all the focus should be on equation (3) not (2). 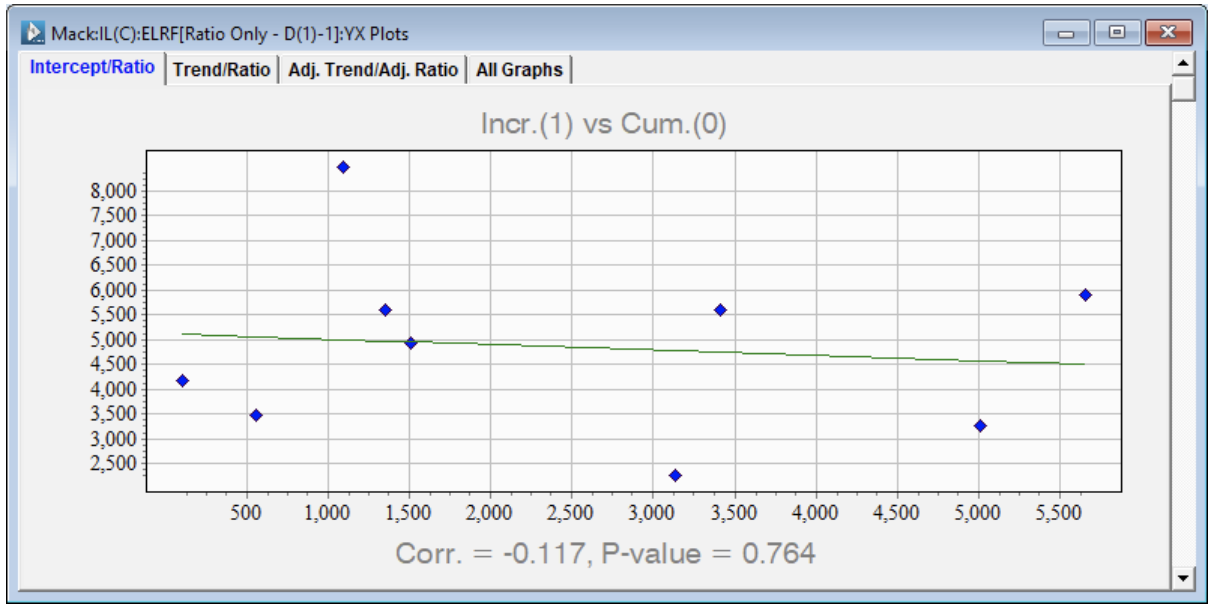 Note that the correlation is zero (slope not statistically significant). Equivalently b – 1 = 0.

In this case, the reduced model only contains an intercept term.

In this model, the incrementals across the accident years are random numbers from a distribution with mean a, and variance, Var(e(w)). If e(w) has a constant variance, then the ordinary least squares estimate of a is the arithmetic average of the incrementals y(w) – x(w). 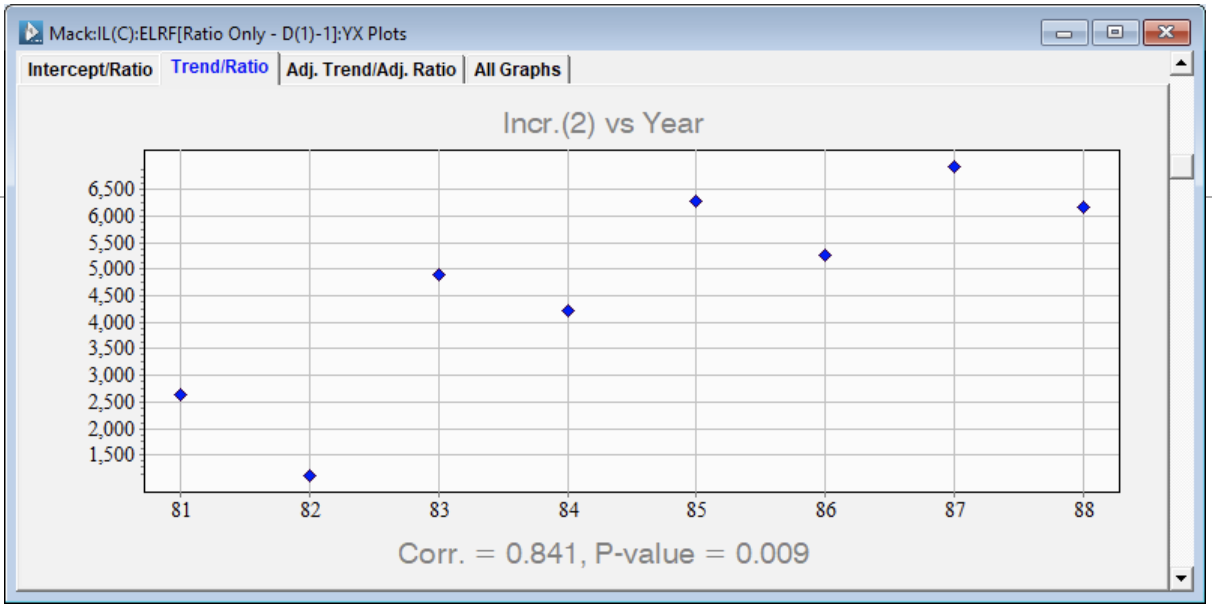 It turns out, if you graph the incrementals in any development period against the cumulatives in the previous period, you will note that there are no statistically significant correlations. All the b-1 parameters are statistically zero.

The assumption that the incrementals are random, might not be true. A case in point, is development period two. This suggests that we need to include an accident year trend parameter in model (3).

The equation that includes the intercept, accident year trend and slope can be written:

where a0 is the intercept, a1 is the accident year trend parameter and b-1 is the incremental coefficient.

The family of models included in the Extended Link Ratio Family (ELRF) are represented by equation (5) between each two consecutive development years. The significance of the parameters is determined by the data.

Link ratios have no predictive power for this incurred loss development array. The optimal combination of parameters uses simply an intercept term with the exception of the regression equation between development periods 1 and 2 where an accident year trend is also statistically significant. 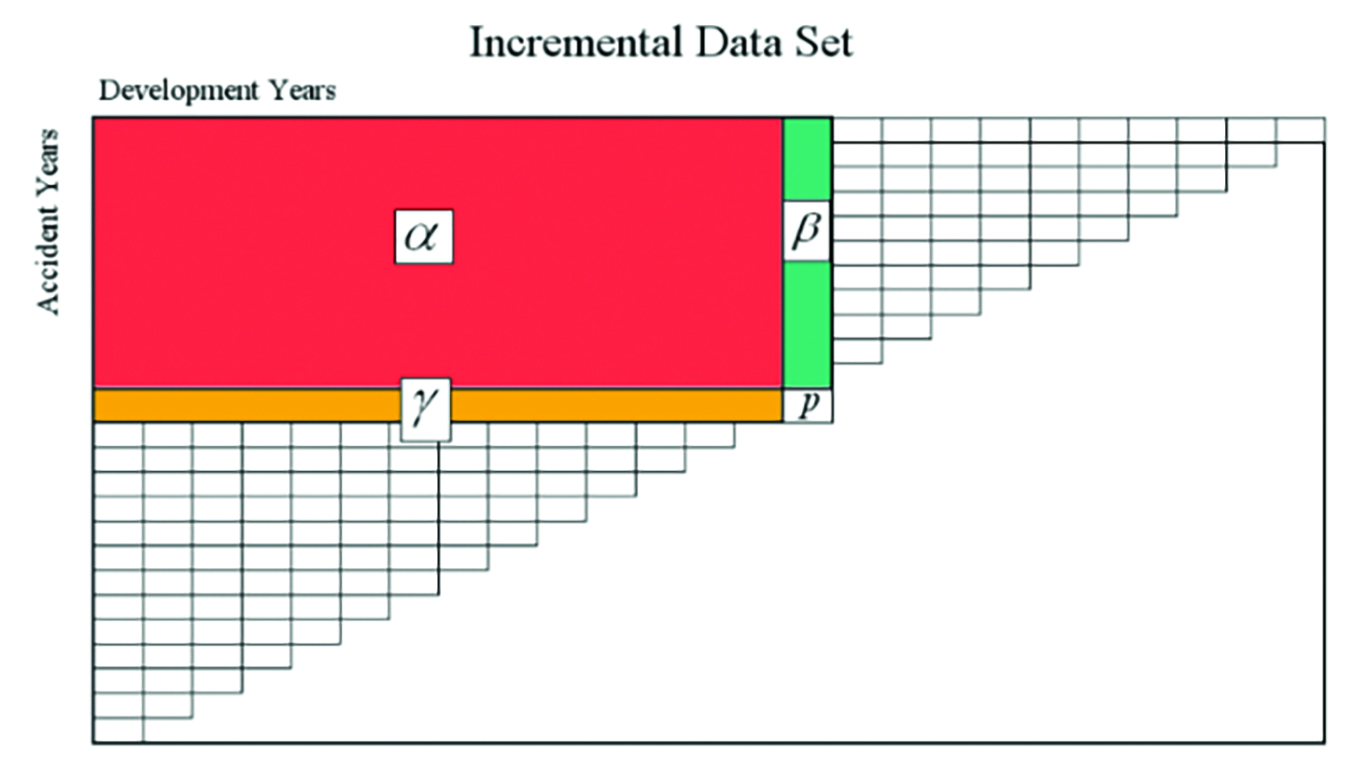 Consider any triangle with incremental values where:

Let p denote the incremental value projected for the accident year represented by the gamma values for the next development year.

If you cumulate along the development years, and

If you cumulate along the accident years. QED.

We know that development years are not like accident years.

CONCLUSION: Link ratios have got nothing to do with the structure of the data.

Clearly, we expect any incremental loss development array to decay to zero, but you would not expect the same pattern down the accident years. 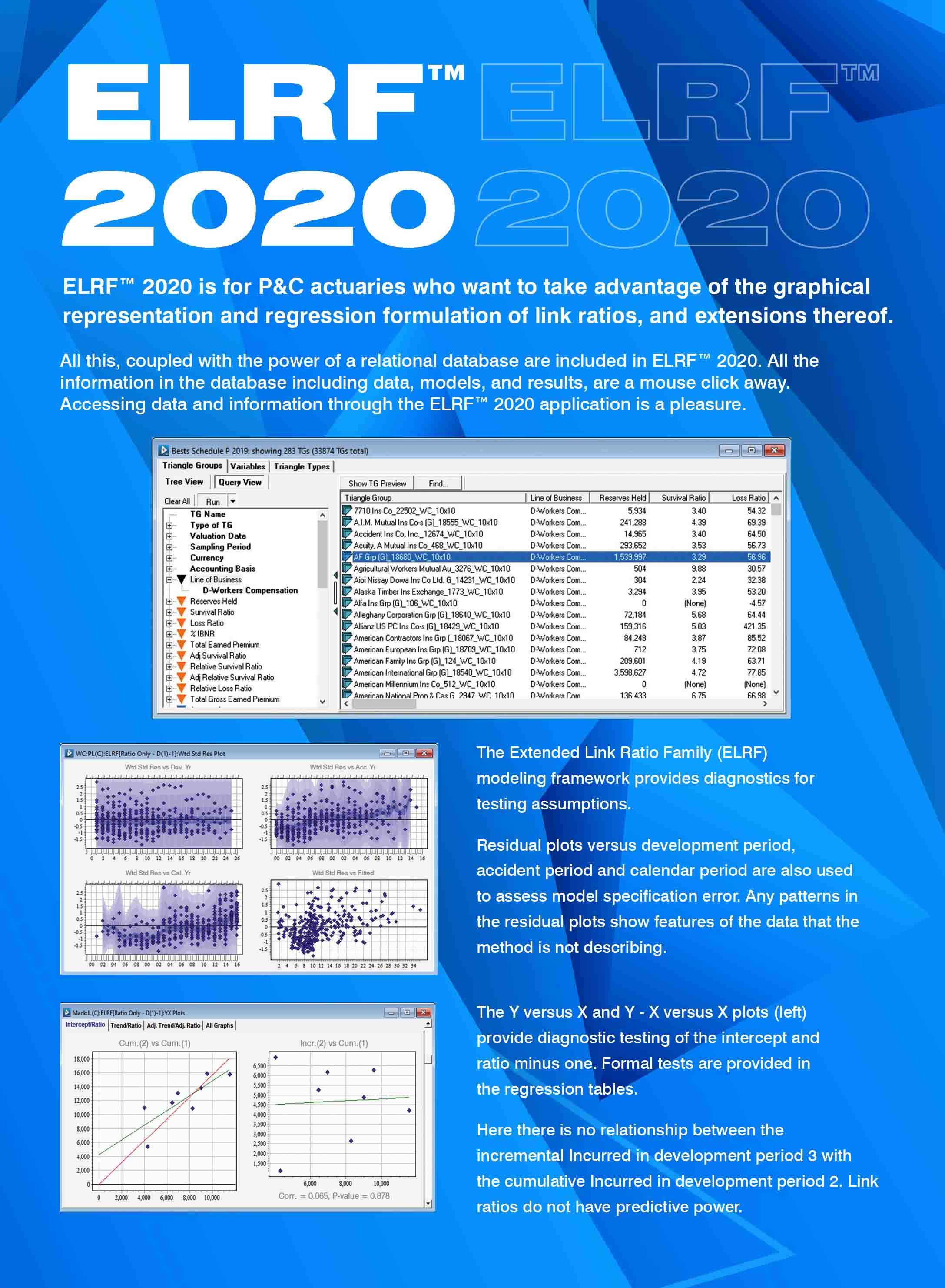 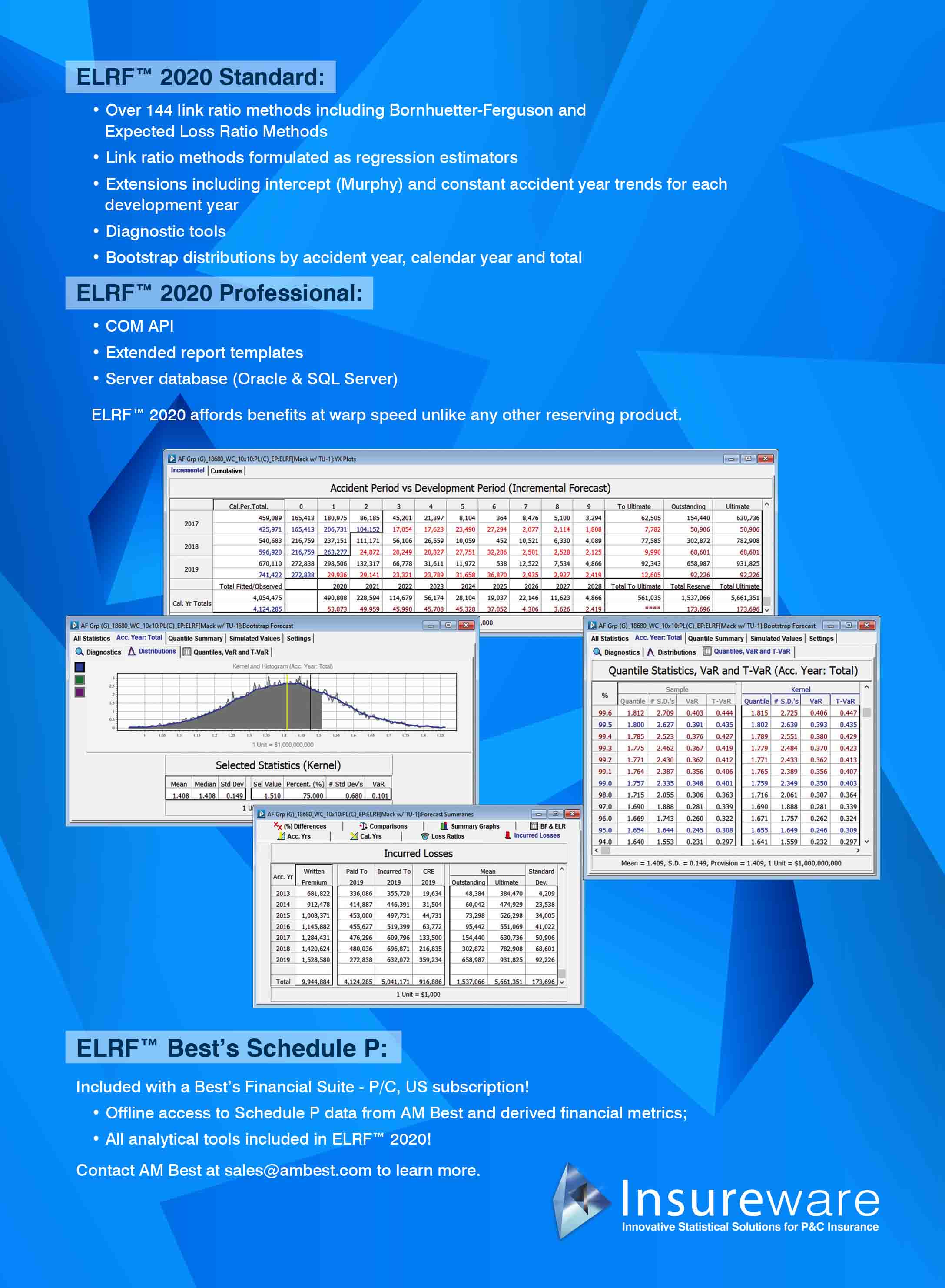