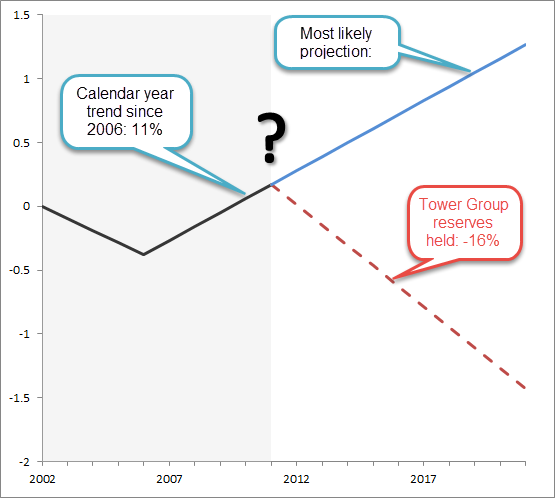 According to Insureware's analyses, further significant reserve strengthening (or upgrades) are very likely. Along with the analysis below, a separate brochure on Tower Group is available here.

Was too much reliance placed on traditional actuarial techniques for long-tail liability losses which were long past their use-by date? Did the company maintain stable loss ratios because it was using Bornheutter Ferguson?

The effective forecast assumptions employed by Tower Group were in complete contradiction of past trends (and volatility).

The ensuing sequence of events were just a matter of time.

Note in January 2014 Tower announced it entered into a Merger agreement with ACP Re – a Bermuda based reinsurance company.

We are concerned reserve upgrades will be required for many years into the future unless the reserving methodology applied to Tower Group's portfolios is seriously revised.

The ideal place to begin our investigation is to describe the trends in entire Tower Group data – that is, all lines combined. We perform this analysis after normalising for earned premium on the paid loss development array. 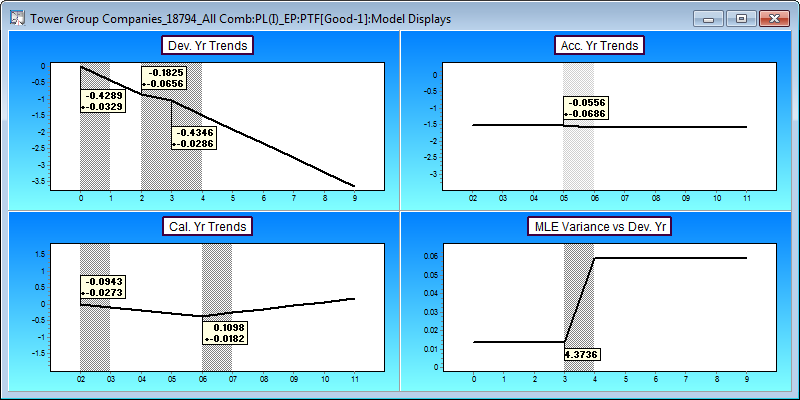 The model for the aggregate of the long tail liabilities is displayed above. We observe:

It is the third point that is the most critical. As we have already normalised by earned premium, this means that paid losses are increasing faster than earned premium by nearly 11% every year.

In order to reach the reserves held figure submitted by Tower Group for the data at year end 2011 ($921M), we have to apply the following future calendar year trend assumption (the vertical green line separates the past (left) from the future (right)). 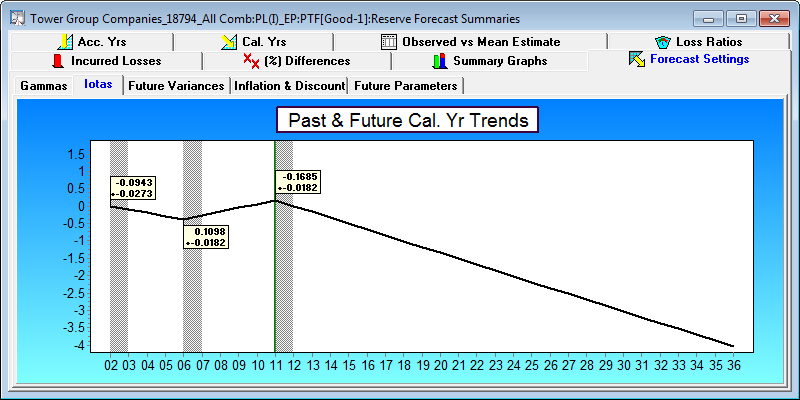 Were the 11% calendar year trend to continue, under the Tower Group scenario losses would then be increasing faster than premiums by 27% per year!

The forecasted liability stream for the -16% trend scenario looks something like the table (below left) below. 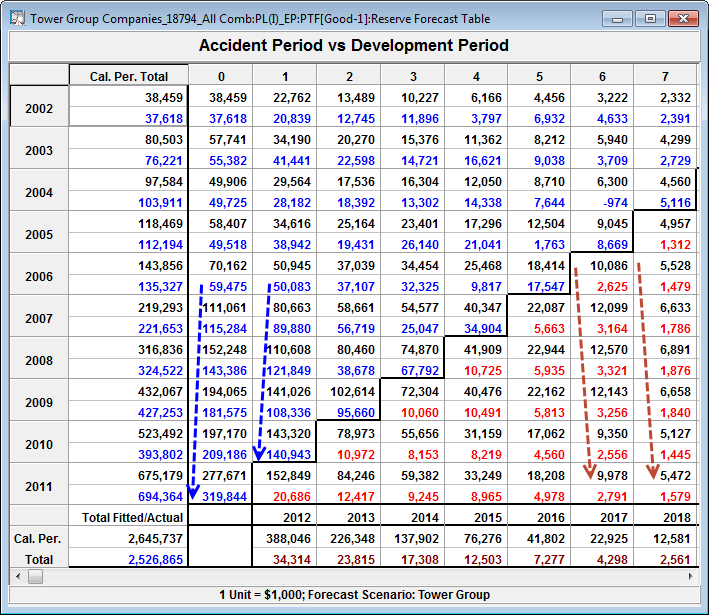 For each observed cell (prior to calendar 2011), we have the pair of observed and model mean values.

For each future forecast cell (post calendar year 2011) we have the projected distribution mean and distribution standard deviation.

Aggregate means are also calculated for the future calendar period (bottom rows) and accident year aggregates (rightmost columns) along with their distribution standard deviations. Calendar year summaries of observed versus fitted are in the column on the left.

Let's compare the projected Tower Group reserve mean with the distributions obtained if the calendar year trend of 10.98%+_ continues. 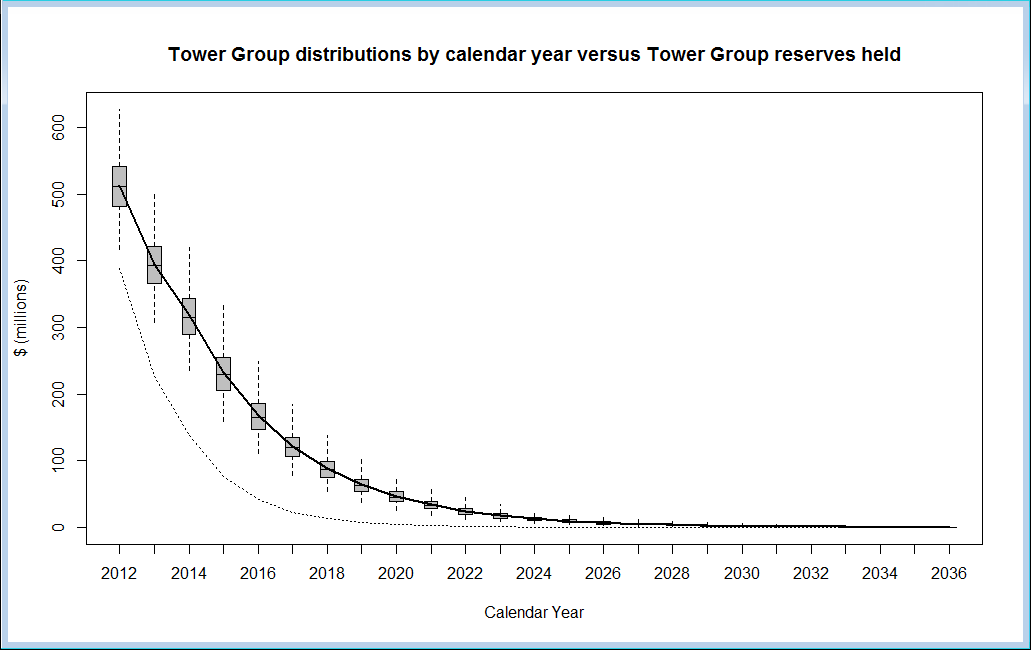 Now we compare the resulting cumulative losses by calendar year between the two forecasts. 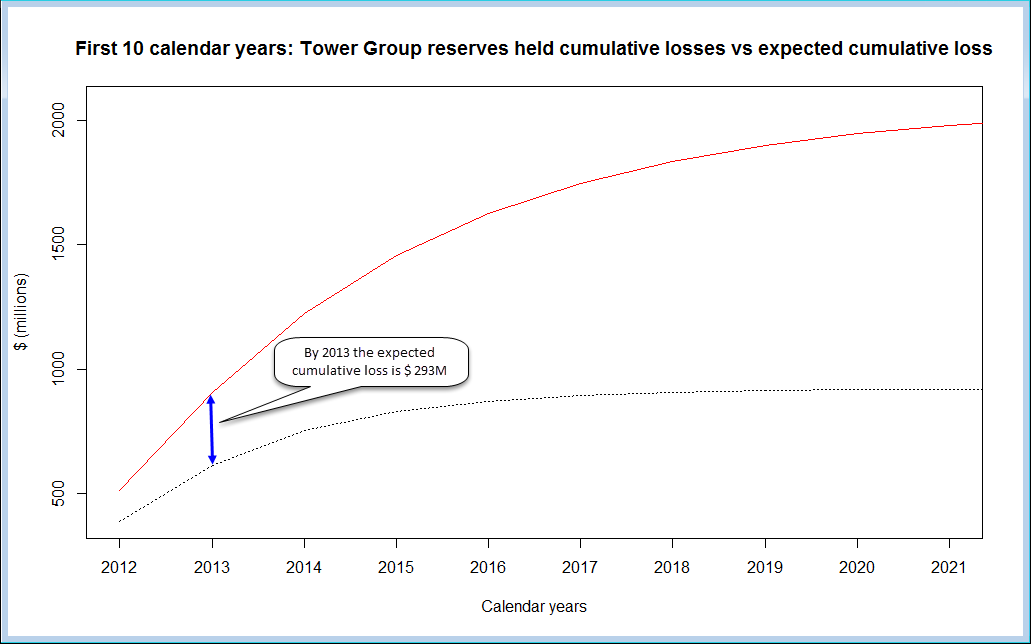 If the paid losses actually followed the 10.98% trend line then we would expect average "adverse development" of $293M by 2013.

Did Tower Group know that in the past there was 10.98% trend and that the future trend required to obtain their ultimates and loss ratios by accident year and total is -16%?

We show that the ultimates held by Tower Group at year end 2011 match closely with the forecast scenario designed to reach Tower Group's reserve held. 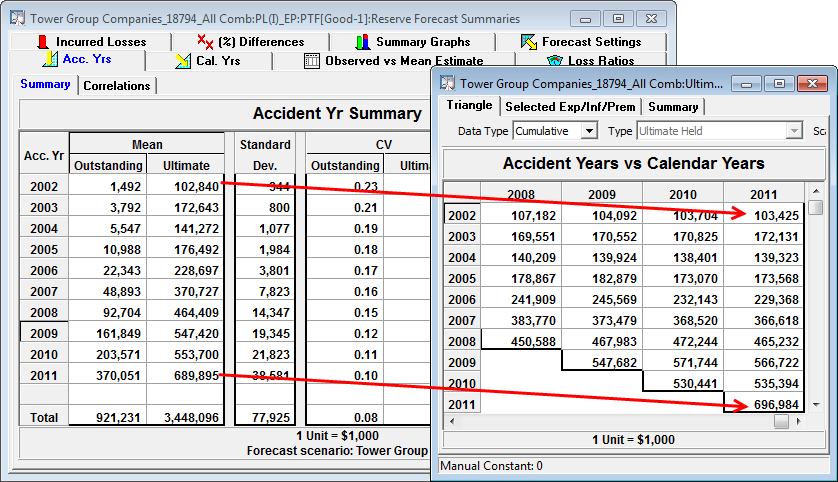 What about the Case Reserve Estimates (CREs)? 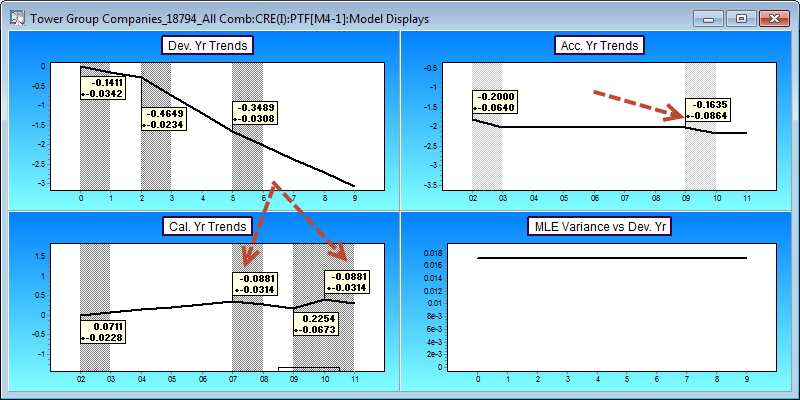 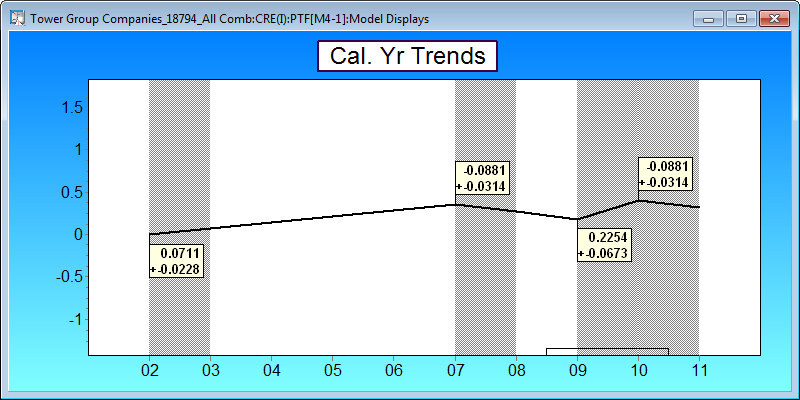 Case Reserve Estimates are increasing over 2002~2007 and decreasing thereafter (calendar year 2009~2010 shows an increase, but is balanced by the decrease in level in the same accident year) by 8.8% per year.

These calendar year trends are in the opposite direction to the losses!!

What about Tower Group's loss ratios?

For the Tower Group scenario, the loss ratios look good. In fact there is no evidence from the numbers that losses are growing faster than earned premium. 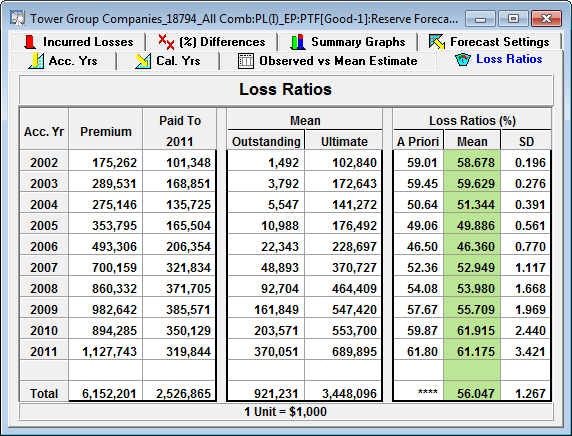